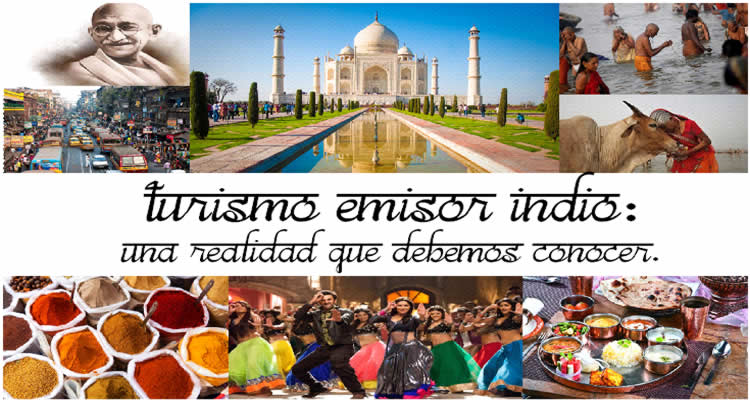 India, a country with a thousand-year-old civilization that is home to countless natural, historical, cultural and gastronomic treasures, is also a potential market for tourism that should be studied. That is why this work aims to reach an approach to the profile of that tourist and that constitutes for our professionals a stimulus to deepen their study.

Indian Outbound Tourism: A Reality We Must Know

India, a South Asian country, has an area of 3,287,590 km² and a population of approximately 1.2 billion people, making it the 7th largest and second most populous country in the world, after China. It borders Pakistan, Nepal, Bhutan, China, Myanmar and Bangladesh.

It shelters natural and cultural treasures of great magnitude, which makes it an exciting and diverse nation. In this mosaic are distinguished its coasts, islands, beautiful beaches, profuse national parks, exciting wildlife and an exceptional historical attraction, heritage and traditions of a country with a civilization of more than 5 thousand years.

It is also characterized by the mosaic of races, cultures and religions that coexist, being able to find more than 200 different languages, originated by the number of ethnic groups that shelters (the constitution of the country defines as official languages English and Hindi).

Its traditions are strongly rooted in society and are the result of Persian, Arabic, Turkish and Mongolian influence, as well as European, especially English, having been colonized by that power for many years.

India achieved independence from Britain on August 15, 1947, ending more than three centuries of domination, with victory after emancipatory struggles that began in 1857 and ended under the leadership of Mahatma Gandhi between 1942 and 1947, a character who resorted to methods of non-violence and civil disobedience.

The so-called Darmic religions are born in India:

The stratification system of their society is that of the castes, which derives directly from Hinduism. At present, they are legally suppressed; however, they are maintained due to their uses, customs and roots within society. They are: Brahmans (priests), Kshatriyas (warriors and rulers), Vaishyas (artisans and merchants), Sudras (peasants and working people) and Parias (destitute).

India, one of the world’s emerging economies, is in the BRICS group, with a gross domestic product of USD 2.264 trillion (2016) and a per capita GDP in the same year of USD 1,709.39. It has diversified its economy, encouraging the rise of a middle class with resources that raise its consumer potentialities. This economy could become the second most important in the world after China by 2040, according to a report published by the international consulting firm PwC.

From the point of view of outbound tourism, studies projected tourism spending above 14,700 million dollars in 2017, surpassing such forecasts, reaching a 9% growth in spending, reaching $18,000 million and advancing four positions in the world rankings, ranking in seventeenth place.

Some of the reasons that have led India to this growth have been, among others: the increase in its GDP; the development of a middle class that could reach 500 million by 2025; the increase in the number of women making business trips; the growing presence of elderly people; the improvement of air connections with different tourist destinations in the world; exceeds 330 million Internet users, making it the second country with more, after China, which is a very useful tool for the search for information and travel organization. For reasons such as these, UNWTO predicts that by 2020, around 50 million Indians will travel the world.

For all this we suggest its study as a potential market and the definition of its profile so that our professionals of the tourism begin to know it, although it is not yet significant for our destiny. This is how we will relate some of their customs, social habits, food and as tourists.

For the study of the markets, it is equally important to know their national holidays, because when their inhabitants are far from the terroir, it is very comforting to remind them of their commemorations.

As part of the cultural wealth of India, is its varied cuisine that arises as a result of the diversity of cultures that have enriched throughout the colonizations over several centuries, incorporating different culinary practices brought by the settlers who eventually mixed to reach the notoriety it has today.

Most Indian flavours are intimately related by the significant use of spices and a great variety of vegetables, with a great diversity of local styles.

The most commonly used spices include saffron, vanilla, cardamom (the third most expensive spice in the world after saffron and vanilla), pepper, cinnamon (can be found in branch or ground and its flavor enhances the taste of fish, of chicken and ham, is one of the most used spices in desserts and is also used to dress fruits or dry masses), Aniseed, Clove and Curry which is a mixture of between 16 and 20 spices in powder, being the main ones: turmeric, cinnamon, cloves, coriander, cumin, ginger, pepper and others that give it its characteristic aroma.

The hottest and strongest is the curry of Madras. Other spices are nutmeg, paprika, paprika (the latter, typical of Hungarian cuisine, is equivalent to paprika, using dried and ground fruits to season soups, meat dishes and salads.

There are two varieties of the latter, sweet and spicy, and it is essential as a condiment for the typical goulash, marinades, rice and sauces); In addition, Ginger, Licorice, Coriander Seeds, Cumin, Mustard Seeds, Turmeric (a spice with a bitter taste that is also capable of giving food a yellow colour, it is almost never used alone, it is always found in combination with other spices), Fennel (it has a distinctive aniseed flavour, and the seeds, whole or ground, add that particular flavour to many dishes). These are examples of the great diversity of spices they possess.

The most important ingredients used in Indian cuisine are rice, atta (a special type of whole-wheat flour with which bread is made), and at least five dozen varieties of legumes. The most important is the chana (chickpea, pea), as well as the toor (Indian chickpea), the urad (black lentil) and the mung (green soya).

Hinduism as a religion promotes simple and natural life as a path to physical and spiritual purity. The diet varies by region, some followers are strict vegetarians, while others eat meat, the result of local hunting. The customs of the Hindu diet are based on the belief that the body is composed of fire, water, air and earth and the food that is ingested can balance these elements or take them out of balance.

All foods fall into one of three categories, and the weight of each causes the diet to vary according to local customs. Sattvic foods are considered ideal and are the only foods ingested in certain customs. Among them are: dairy products such as milk or clarified butter (ghee), nuts in general such as nuts, almonds, dates and also seeds and fresh fruit juicy, nutritious, full of minerals and vitamins.

Vegetables also fall into this category, as do natural sweeteners, unrefined (molasses, maple syrup, etc.). Cereals are the ones that provide energy to the organism; quinoa, rice, oats or cereal sprouts are part of this group. They are all considered to cleanse the mind and body, increasing inner tranquility.

Very hot, spicy, or acidic foods are compared to wine and meat. The consumption of alcoholic beverages and meat develops violent tendencies and animal diseases, according to this belief.

Tamasic foods are thought to promote negative emotions and include foods past, rotten, overripe or otherwise inedible.

Vegetarianism is commonly associated with the Hindu diet, but most Hindus consume some kind of animal products. While vegetarians refuse to eat any food that comes from an animal, some Hindus eat dairy products, fish and shellfish, and even poultry.

Pigs are consumed in regions where their wild condition has historically been a source of food in times of need. Most Hindus do not eat meat, cows are seen as "the mother", but meat is consumed in small sections of Hindu populations.

Hindus practice fasting for spiritual reasons on holy days, but the practice varies according to local customs and individual preferences. Some followers avoid all nutrients, others drink only juice, and others limit themselves to just one meal a day. Fasting is seen as a physical and spiritual restart that greatly improves the condition of the body.

For service providers in any of their departments, this information can be valuable. However, it is not everything, as I always insist, it is fundamental the constant search of information and study of the markets with which we work, contributing to elevate our professionalism and the most important thing, to obtain greater indexes of satisfaction of the clients and to conquer their preference.

Rosendo Bermúdez Prieto. (2019). Outbound tourism from India: a reality that we must know. Revista Vinculando. https://vinculando.org/en/outbound-tourism-from-india-a-reality-that-we-must-know.html