Emotions have a great power inside us that we should know, because they have the power to give us health or, conversely take it away.

Humans are an integral being composed by physical body, mind, emotions and spirit, when one part is badly it affects the others, for example, if we are always concerned about everything, we end up affecting the stomach and spleen-pancreas; or it may happen that, as a result of hepatitis, we are in a bad mood at the slightest disappointment.

You can also visit this page about Reiki as a healing therapy using your hands (in Spanish).

This case involves a 17 year-old-boy who suddenly found himself affected by a kind of psoriatic outbreak throughout his body. As expected search began treatment with a dermatologist and later another one. Summarizing in January 2010, more exactly on January 20th, he came to visit me in the conditions amply represent in the first two pictures. After the questionnaire we decided to start Reiki conventional treatment, it is 4 consecutive sessions and later 4 more sessions, once a week. Adding to the Reiki treatment and because the initial situation presented (think about the situation on a teen boy with this condition throughout his body including the face) Rescue Remedy was recommended up to be able to achieve a recommendation tailored to his real emotional condition, which would require at least one, two or more interviews.

As all the people who practice Reiki know, no diagnosis or prognosis, but in the first session there was a point that was clear, he came here because he was willing to be better, he should make the effort and I should simply help to him as cane to lead his way.

As we expected many things occurred during those first 4 sessions things were unlocked and those were reflected in the change of his attitude and posture.

After the first 8 sessions and with only a month and a day of treatment he achieved what shown in the second pair of pictures. As you can see the lesions disappeared leaving only the difference of pigmentation marks on the skin, the same degree of change was achieved in his attitude and he knew it when he said : "I’m in a better mood and I am not rude anymore, I really feel better .

I acknowledge that I have seen many wonderful things through Reiki, but in this case the change was in such short time after the suffering for a long time that surprised me. The strength that he put in his recovery really made the difference. 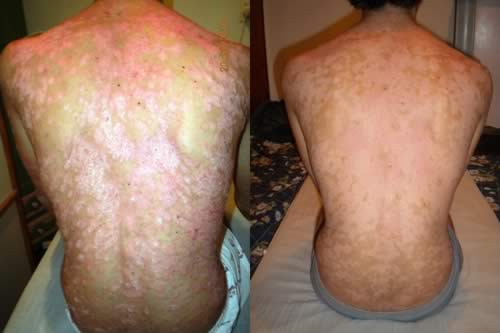 Current Condition: February 22nd, 2010 (after one month of treatment):

I wanted to briefly show this case in this lines, since many times before giving routine meetings we forget the power that have this that we are doing each time that everyone fulfils his role.

Let God surprise us about what can be achieved when someone decides to heal and is help with true love through Reiki, Bach Flowers, or the therapy that is appropriate for each one.

When we try by heart to do something the universe conspires with us, so that becomes possible. Imagine where you can get when many people are together in a chain of Reiki to distance!

That we still ride around this beautiful road, although not all are roses, plant it worth trying.

As the Reiki Master Jorge Barbiere Mejia said: THE POWER IS INSIDE YOU.

You are who decides how to live or give you the opportunity to live better. You must give the first step for any change.

Note: Gustavo C. Fritz is Reiki Master – Bach Flowers Therapist in Argentina. You can see his resume (in Spanish) here. Reproduction permitted with mention of the source and e-mail address: [email protected]